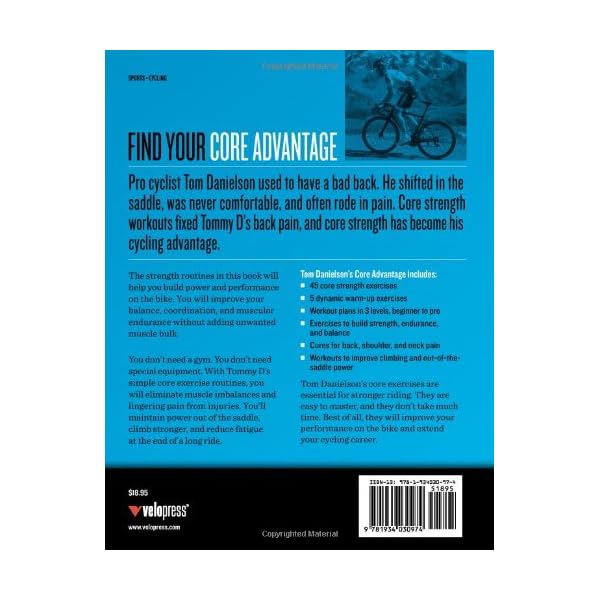 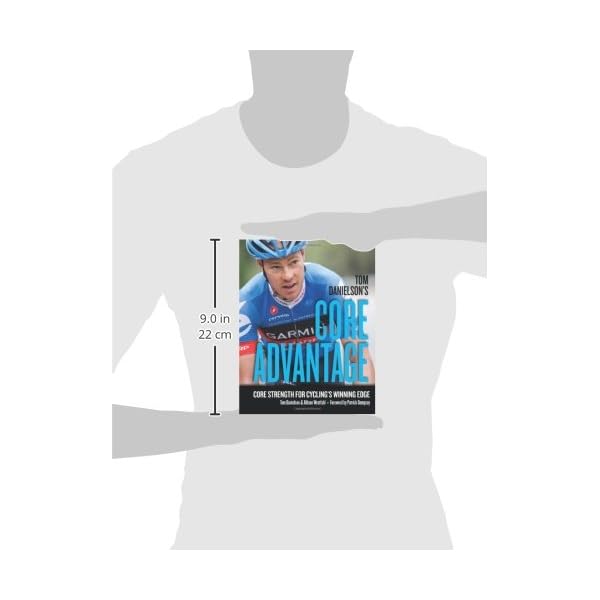 Product prices and availability are accurate as of the date/time indicated and are subject to change. Any price and availability information displayed on [relevant Amazon Site(s), as applicable] at the time of purchase will apply to the purchase of this product.

“Tom Danielson’s Core Advantage provides both a solid basis of theory and practical exercises for improving our cycling. Designed specifically for cyclists” ¦from the ground up to prevent cycling injuries and with the specific posture and motion of cycling in mind” ¦Holistic and progressive workouts” ¦Absolutely no equipment of any kind is needed.” — Pezcyclingnews

“Tom Danielson’s Core Advantage argues for a different kind of core training than the traditional parade of crunches” ¦The style of training works for everybody who exercises and especially for those who are getting older and are familiar with nagging back issues.” — Denver Post

“Even if you’re not suffering from back pain, [these 50 exercises] are a helpful, practical and surefire way to improve your riding.” — RoadBikeRider.com

“In their book, Danielson and Westfahl discuss the importance of core training and offer plans for cyclists of all levels.” — The Olympian

From the Back Cover

Pro cyclist Tom Danielson used to have a bad back. He shifted in the saddle, was never comfortable, and often rode in pain. Core strength workouts fixed Tommy D’s back pain, and core strength has become his cycling advantage.

The strength routines in this book will help you build power and performance on the bike. You will improve your balance, coordination, and muscular endurance without adding unwanted muscle bulk.

You don’t need a gym. You don’t need special equipment. With Tommy D’s simple core exercise routines, you will eliminate muscle imbalances and lingering pain from injuries. You’ll maintain power out of the saddle, climb stronger, and reduce fatigue at the end of a long ride.

Tom Danielson’s core exercises are essential for stronger riding. They are easy to master, and they don’t take much time. Best of all, they will improve your performance on the bike and extend your cycling career.

Allison Westfahl is a certified coach, personal trainer, and founder of The Athletic Edge, a fitness consulting company based in Boulder, Colorado.

She was named the youngest-ever Director of Personal Training at Boulder’s prestigious Flatiron Athletic Club, named in 2006 by Men’s Journal as the Best Gym in America.

She holds an MS in Exercise Science, a coaching certification from USA Triathlon, and has earned a CPT and PES from the National Academy of Sports Medicine. Westfahl has worked as a personal trainer to amateur and youth athletes as well as elite cyclists Tom Danielson, Ryder Hesjedal, Timmy Duggan, Blake Caldwell, and Mike Friedman. She has contributed to the Denver Post and Bicycling magazine.

Tom Danielson is a professional cyclist with consistent top 10 race results in elite sage races. Danielson kicked off his racing career winning the national collegiate mountain biking championship riding for Fort Lewis College. He began his pro road cycling career riding for Team Mercury and then Team Saturn. Danielson won the Tour de Langkawi, Nature Valley Grand Prix, the Cascade Cycling Classic, Tour de Toona, and the Mt. Washington Hill Climb. In 2004, Danielson signed on with the Italian squad Fassa Bortolo and then Discovery in 2005 when he won the Tour de Georgia. While riding for Discovery, Danielson won a stage of the Vuelta a EspaÃƒ ±a. Since 2007, Danielson has consistently placed in the top 10 in elite international and U.S. domestic stage races and Grand Tours, including stage wins in the 2011 Tour de France and USA Pro Cycling Challenge.